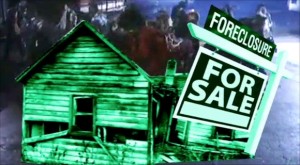 Zombie Foreclosure Apocalypse coming to your neighborhood… Are you prepared?

Zombies are everywhere!  From comic books, TV dramas, to the popular AMC show “The Walking Dead”.  Zombies are the NEW Pop-Culture trend.  As popular as they may seem in mainstream media there is one market that the Zombie is a social outcast; an unwanted and a real life haunting creature!  In your NEIGHBORHOOD!  Zombies, yes Zombies RIGHT NEXT DOOR!  As in “Zombie Foreclosures”.
I grew up watching Sesame Street (Not the Walking Dead).  So, it may not be relatable…but just maybe you can remember the song “People In Your Neighborhood”?  Well, I never expected that I would consider a ZOMBIE as a neighbor!  But it’s likely.
It has been estimated that there are 141,406 “Zombie Foreclosures” nationwide in Q2 2014 (21 percent of total properties in foreclosure). That equates to roughly 1 in 5 foreclosures nationwide.  Florida leads the nation in Zombie Foreclosures. Florida accounted for more than one-third of all zombie foreclosures (48,630).  Source RealtyTrac.
Zombie Foreclosures are properties that have began the foreclosure process.  The homeowner has vacated the property and houses sit empty as lenders fail to complete the foreclosure process.  Zombie Foreclosures are a byproduct of lengthy foreclosure timelines and an already overloaded legal system.  These forsaken homes are left in a state of limbo in which the owner has walked away and the bank has not reclaimed the property. Many of these properties are likely to be the eyesores that drive down the values of surrounding homes and eroding local government tax revenue.
Is there a solution?

How do we prevent a Zombie Foreclosure Apocalypse?

If you live in a neighborhood with a Zombie Foreclosure you can form a neighborhood task force.  Delegate phone calls to the mortgage holder, your city council, and communicate the neighborhood’s desire to expedite the foreclosure process.  Use Social Media to connect with your neighbors and educate each other on your states foreclosure process.  Have a “clean up” day where everyone pitches in to keep Zombie property clean and work to maintain the yard.  Although this may seem like a huge burden it will help protect your property value.
Banks are making some efforts to prevent more Zombie Foreclosures.  “Cash for keys” is a program once used as an incentive for renters to leave properties undamaged.  Today, the term is being used by banks.  Financial institutes are approaching homeowners who have stopped making mortgage payments and are offering them cash to turn over the deed (deed in lieu of foreclosure), which is actually in effect “cash for keys”.  The cash being offered can be a lot, sometimes as high as $20,000!  Many times that homeowner is skeptical and thinks it a scam, but it is for real.

This is not the average horror Zombie show.  Actually, these Zombie Foreclosures can present unique opportunities for the savvy home shopper or investor. Zombie properties make excellent short sale prospects. The homeowner left the premises and therefore much more likely to be interested in selling that home via short sale than a distressed homeowner still living in the home.  The bank wants to sell the property before it is vandalized and loses value. Great deals can be made.
However, negotiating the red tape can be time consuming and daunting to say the least.  A Realtor with Distressed Property knowledge is an a great resource and a “must have” if you want to secure a Zombie Foreclosure without future hauntings!
With Florida leading the nation for Zombie Foreclosures, I question, is there a new creature on the horizon?  The Zombie Mosquito?  This is Florida that we’re talking about, it’s not totally out of the question to assume that a large chunk of these homes have pools. Right?  Stagnant water attracts mosquitos…will Zombie properties create the Zombie Mosquito?  Another issue for another day.